David’s Comments: “I have 2 of these, one of the prototypes and #1 of the series of 83 guitars, and I use them interchangeably.  They were made in 2006. The Martin company also calls this guitar M-42. All of the Martin guitars identified as M models are copies of a guitar that Matt Umanov made for me in the ‘60s.  They are the shape of Martin 000 guitars, but larger. My signature guitars could have been called 0000-42. Matt made me the guitar that was later copied by Martin by converting a Martin F-7, which was an arch-top guitar, to a flat top guitar, and replacing the neck with a larger scaled neck.  He got a D-28 neck from Martin. The Martin arch-top guitars never sounded like arch-top guitars, so they were not successful. There were at least 3 conversions of F model Martin guitars before Matt did mine. The difference my guitar and the previous conversion was the neck. The previous conversion used the original necks and fingerboards (smaller scale) that were on the unconverted guitars.  The difference between the smaller scale necked guitars and the longer scale ones is huge. I loved the guitar that Matt made for me and had another converted & used the original neck. The guitar played very differently in a way that I didn’t like. In the ‘70s I was visited after a show by a few Martin employees with a new guitar they had designed. They asked me to play it for a week & tell them how I liked it.  It was like an M, but with the depth of a Dreadnaught. I told them it was nice, but not something I would play. They then sheepishly told me that they’d had enough requests for a guitar like mine so they’d designed what they’d brought to me. I then spent a couple of days visiting all the executives that worked at Martin at that time, & loaned them my guitar which they copied (except for the elaborate pearl inlay Matt had done), and issued the first series of the M model guitar: the M-38.  Since then, the M models have been in and out of their production line. At one point they made only Ms and Dreadnaughts. The M is currently in production, and has been for quite a few years now.” 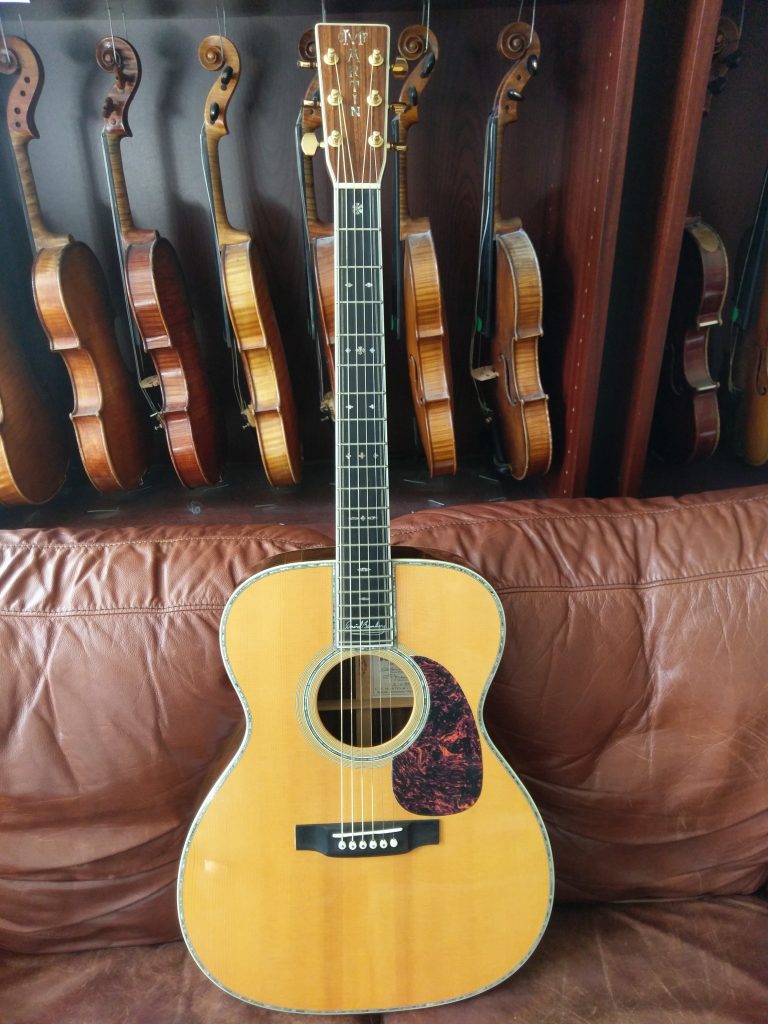 David’s Comments: “I recently acquired a ‘59 telecaster with a 57 neck.  Sort of a Franken-tele.  Someday I hope to find a ‘59 neck.  The bridge pickup is original and sounds as one hopes it should.  The neck pickup is also the right vintage, but has been re-wound.  These Telecaster neck pickups are not known to have much of a useable sound, but I’m crazy about the sound of my rewound neck pickup.  I like to use my Fenders through the small Electar amp.” 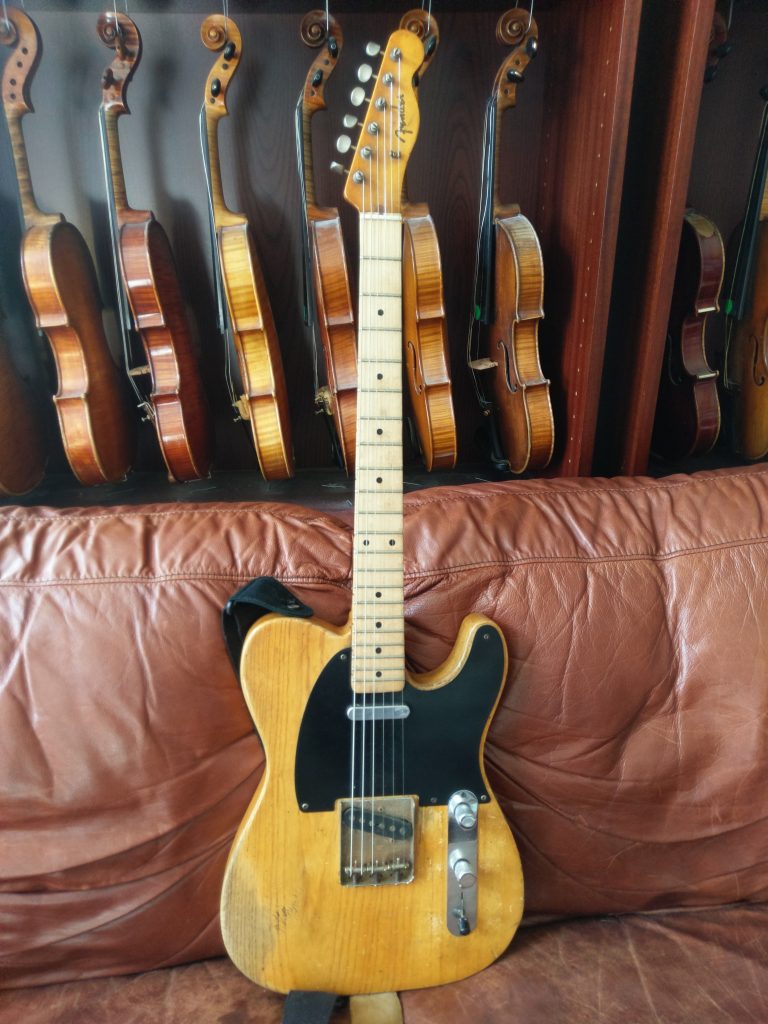 David’s Comments:  “I was in Nashville on my birthday a few years ago, and found an M or 0000 guitar from the Martin custom shop.  It knocked me out, and I bought it.  It’s similar to my signature guitars, but without the pearl.  I attribute the big sound of the guitar to the fact that it was made in the custom shop with hot hide glue instead of white glue.  Violin makers hate white glue as it always stays in between the pieces of wood that it’s supposed to join.  With hide glue, wood touches wood, so any instrument made with hide glue will probably sound better than one made with white glue, although there are never guarantees, and each instrument is an individual.  It is worth noting that Martin, (and Gibson) made their guitars with hide glue until the ‘60s.  Martin gradually substituted white glue for hide glue in this decade, which may explain the popularity of guitars made before the ‘60s.” David’s Comments: “This guitar is even more recent than the last.  Martin had a meeting with the leading retailers of vintage Martin guitars and asked them what they’d like to have.  The answer was a guitar with the same specs, including wood and varnish thickness, as on the pre-World War II Martins.  They also specified that the guitar had to be made with hot hide glue.  I wanted to go up to Martin to play on a few, but they were all spoken for and back ordered.  Fred Oster of Vintage Instruments and an old friend of mine had one.  It took me about 45 seconds to decide that I wanted to buy it.  It sounds amazing.  Fred gave me an unbeatable deal.” 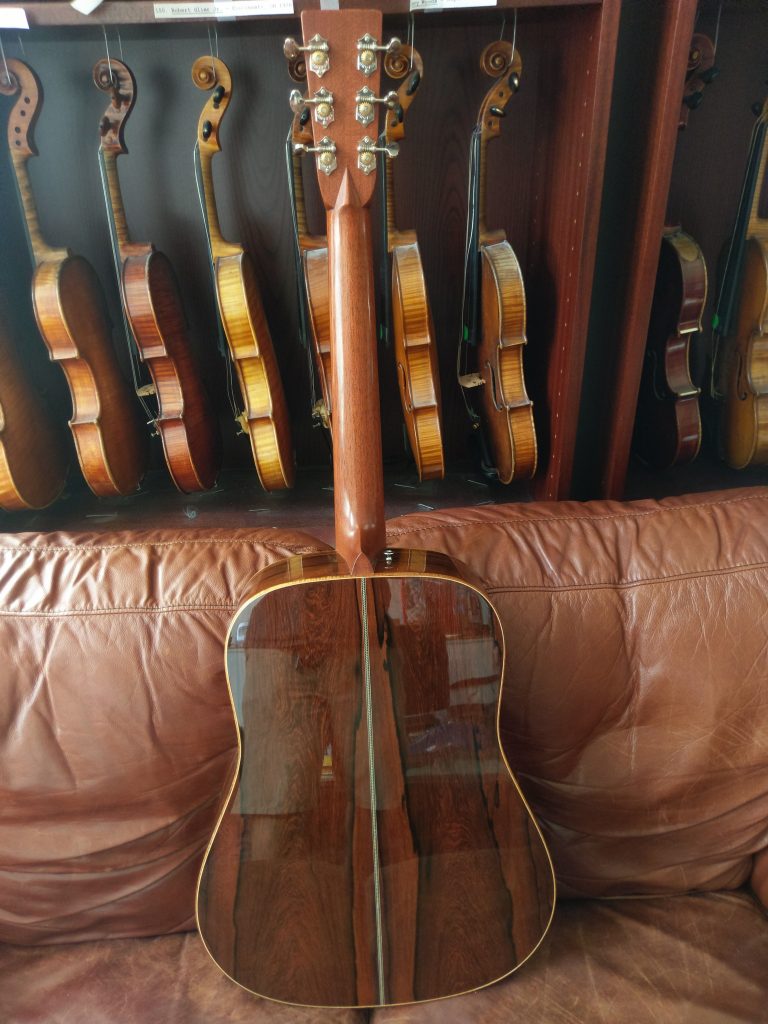 David’s Comments: “I sometimes bring this guitar on the road. It was made in the last few years.  I got a yen to own a rosewood Dreadnaught again, went up to Martin & played quite a few of them.  This guitar was one of 10 that they had made of Madagascar Rosewood for their best retailers. I was lucky that they let me buy it.  I thought it was the best sounding guitar in the shop.” David’s Comments: “I bought this in the Jurassic Age, sometime in the 1960’s.  It was “used” then; it’s “vintage” now. I think that it’s a late 50s model.  Originally, like all Fender Esquires, it had only one pickup, at the bridge. I had Red Rhodes install a “patent pending” Gibson humbucker in the neck position, and one of Red’s “velvet hammer” pickups at the bridge position.  I never did get the original pickup back, although I did buy an old Fender lap steel pickup which is nearly identical to the original bridge pickup. I haven’t tried it yet, and I do like the “velvet hammer.”” David’s Comments: In the ‘70s, I’d owned (at various times) 4 different 1920’s Gibson F5 mandolins; 3 signed by Lloyd Loar, and one probably made under his stewardship, but sold just after he left Gibson, so no signature.  These days these mandolins cost around ¼ of a million dollars, although when I sold mine, $3,000 was a lot. When I started to play again, I missed having one of those mandolins. I played a very good Eastman mandolin for a while, but my wife Nancy found a 1973 Gibson F5 at a flea market.  The early ‘70s were the worst years for Gibson mandolins, and although I asked Nancy to buy it, it sounded as bad as I had expected. I followed my plan and immediately sent it to Randy Wood in Bloomingdale, Georgia. He rebuilt it and it sounds great now. It might not sound like a Lloyd Loar, but it’s close enough for me.

I now longer have the mandolin that Nancy bought me in a flea market.  It imploded due to the bad plastic binding.  I have a different F-5.  When Gibson first started to try to make really fine mandolins that might eventually complete with ones made under the supervision of Lloyd Loar, they sent unvarnished mandolins to Jon Cooper, a very fine violin maker, to varnish them with a soft varnish that might be similar the varnish on the Loar instruments.  Jon eventually decided he didn’t want to spend so much time varnishing someone else’s instrument, and stopped varnishing the Gibsons.  Gibson found another way of getting their best instruments varnished.  Jon had a Gibson mandolin that he hadn’t varnished and didn’t want to varnish left over.  I bought it and sent it to Randy Wood in Bloomingdale, Georgia, who finished and varnished the instrument. 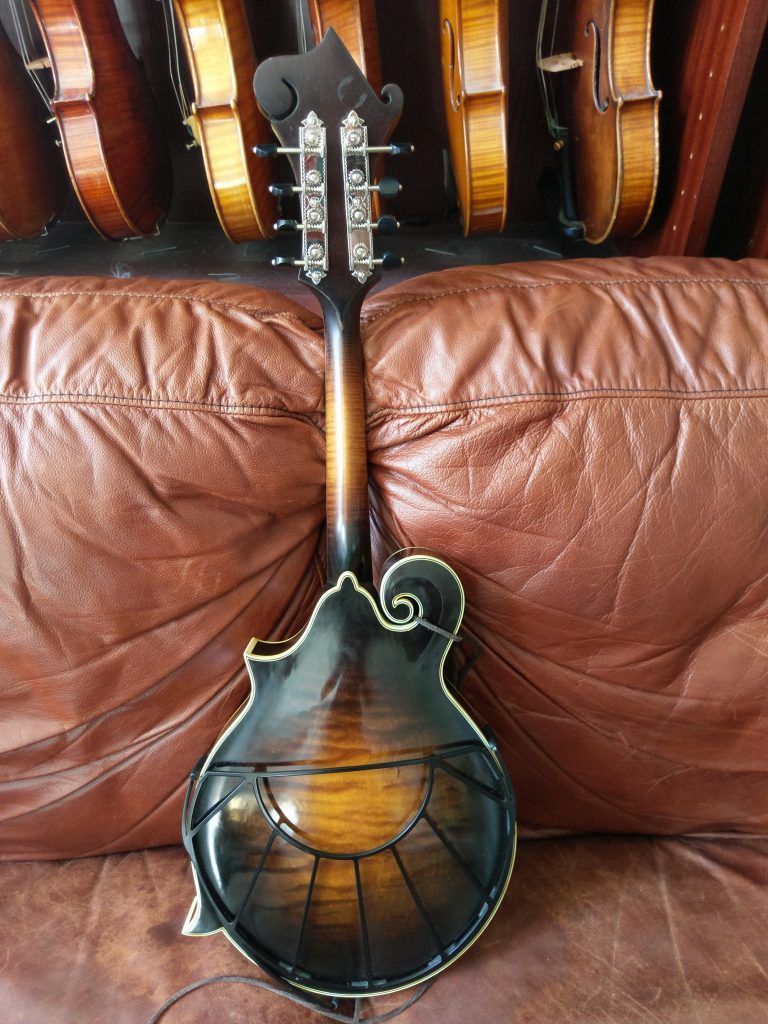 Electar amp (small): This was made c.1938, I think by Nat Daniels who founded Danelectro. When he made this, he was still in high school. I have a number of these amps (see below), and my amp guru tells me that each individual amp is different. Apparently, he made them with whatever the hardware-electronics store had at the moment. When I made “Use Me” John Hiatt brought a Valco amplifier to the session. I used it and loved it. I’d never played through anything but Fender amps before, but this amp got me interested in other vintage amplifiers. Nancy got me this for my birthday. She found it in Marc Moss’ basement (Marc engineered 2 of my CDs). He never used it. I love it. When I fly, I put it in the overhead compartment. Fender Bassman amp: “This is one of the all-time great amplifiers.  It was made in 1959, and in the late ‘60s I was running errands for Dan Armstrong who worked on electric guitars on 48th Street in New York.  This amp belonged to S.I.R., and they felt it was too funky looking to be rented out anymore.  Dan urged me to buy it even though the speakers were blown out. That was only one of the reasons I’m grateful to him.”